Here’s another addition to my collection – a signed copy of the second Sea Hunt comic #994.
This comic arrived with a certificate of authenticity as well.
This will bring my comic collection to a total of 67 items, my American publications to 28 with 7 signed. 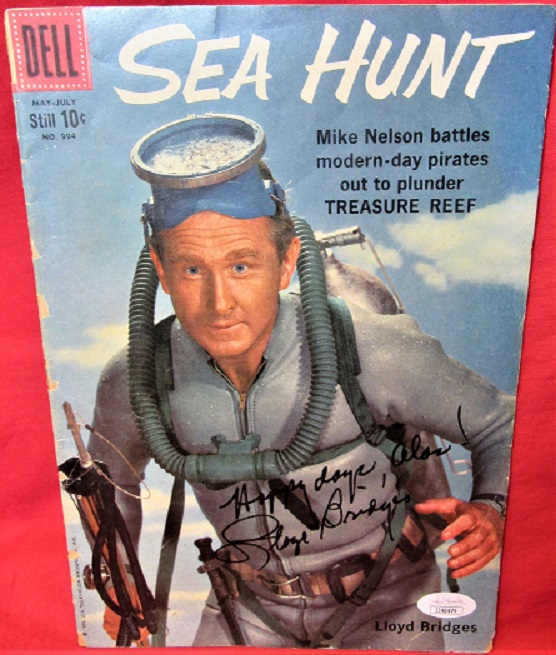 Another signed copy of a Sea Hunt comic for my collection.
This is issue #9. With this new comic I now have 68 Sea Hunt comics, 29 American publications & 8 signed. 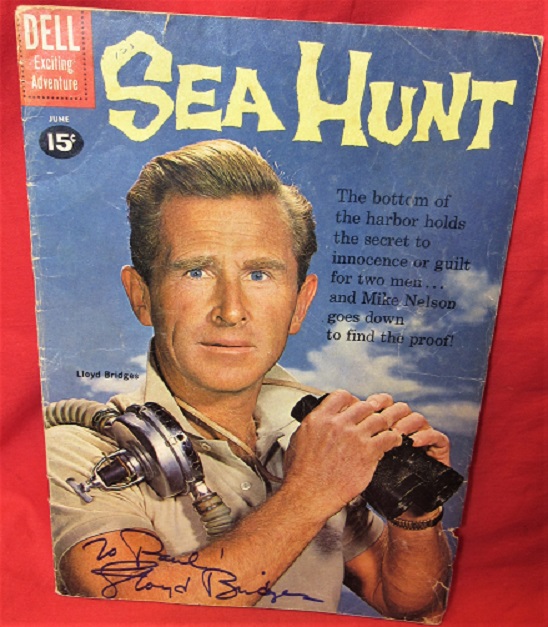 Here’s a clear sign that my Sea Hunt Collection is nearing completion – I have acquired Mike Nelson’s Bathing Suit!!
Some may say that it’s weird to add a bathing suit to a scuba gear collection but, first, the bathing suits of the mid-1960s were unique in some ways plus, Mike’s bathing suit was the most common piece of equipment that he wore yet was usually unnoticed.
I figured that for completeness, my collection should have one & I should comment on it.

First a comment on style. Bathing suit styles today, 2022, are a mixture as always but the predominate style is a version of the ‘Board Short’ as worn by California surfers.
It usually hangs down to the knees or even lower; it is loose, almost flappy; it features a stretchy waistband, usually 2 pockets, a small one inside & a second one on the outside leg & is almost always in a wild, colorful pattern.
In the 1960s, bathing suits were much more practical, less an advertisement of the wearer’s sense of style and more a useful piece of clothing.
So Mike’s suit is a stretchy fabric in a short leg style, like a boxer brief. It is snug to the body which is much more practical for scuba divers. Trying to tuck all the flapping material of the Board Short into a tight-fitting wetsuit is a nuisance.
It was, as can be seen on the Sea Hunt episodes, a monocolor with few if any adornments. Mike’s suit usually looked white on TV and it may have been white but any light color would have looked the same on Black & White TV.
The only adornment might have been a simple logo, either a manufacturer’s name or little image. In Mike’s case, I’m betting the logo on his was a diver as with this one in my collection.
And sometimes the waistband was a different color than the body of the suit.
Features were few and consisted of a cord waistband, & a small pocket on the inside at the waist.
That’s it.

So here is Mike’s Bathing Suit. As I have said before, this is NOT the actual bathing suit that Mike wore (who knows for sure??) but it is the exact style & color and was made in the 1960s.
It is a bright yellow stretchy material which would have appeared white on television.
This one has a couple of colored bands on the waist and a small black logo on the leg. This logo is a scuba diver. The scuba tank, regulator, fins, mask & speargun are all visible even though the logo is a mere 3” long.
The back of the suit is unadorned yellow.
It has a cord to tighten the waist and a small coin pocket on the inside of the waistband.
That’s all – simple, attractive & practical.
Just like Mike Nelson

The Mity-Lite was a cheap, plastic lantern that was hyped as an indestructible, waterproof light, perfect for fishermen, campers, sailors or divers. In fact, it was so poorly constructed that very few have survived.
The lantern body was OK but the seal for the sealed beam bulb was very poor and invariably leaked. The open wiring inside would be destroyed in a very short time. The switch as well would commonly leak.
The Mity-Lite was essentially a square, plastic box with one round side into which an automotive-type sealed beam bulb was fitted with a large rubber gasket.
It used a square 6v lantern battery still common today although the original battery had screw terminals. It had a push-on/push-off switch under a rubber cover on one side & a long, white, braided lanyard.
You can see these features in the pictures.
I’ve also included a copy of a color advertisement for the Mity-Lite, a black & white ad from Skin Diver magazine and a copy of the original Owner’s Manual complete with Care & Maintenance.

The Mity-Lite was used by Mike Nelson in only one episode. It is called Storm Drain, Episode #1107. You can see this episode here.
As you watch this episode, you will see the policeman shooting at the young man down the sewer is carrying a VOIT FL3 Dive Light!!!
It’s an exciting story (aren’t they all??) in which a newly-wed young man robs a jewelry store to get money so he can provide for his wife. The young man is chased by the police and he hides in a storm sewer but, he gets trapped in deep water.
Mike Nelson has to go into the storm sewer to find him and bring him out. It’s dark in the sewer, hence the need for a lantern – the Mity-Lite.
The other reason I like this episode is that the young man is played by Beau Bridges, Lloyd’s oldest son.

The Mity-Lite is also special to me because it took so long for me to find it. The first problem was to discover the make & model. That wasn’t easy from just the television images.
Then trying to find any information about the Mity-Lite was nearly impossible.
I spoke to many old divers and quite a few vintage divers too. There is a difference!
I phoned dive shops all over the country and signed into a dozen Vintage Flashlight Forums in my search. Nothing! It was as if the Mity-Lite had completely disappeared. I began to think I’d never find one.
One day a diver responded that he had a Mity-Lite. Needless to say, I was delighted and did my best to acquire it. Nope! Nothing I tried worked. Having finally found a Mity-Lite, I couldn’t get it!!
Then, about a year later the same diver contacted me about one of my eBay listings that he was interested in. The details are not important. Let’s just say that I now have a Mity-Lite.

As a result of my lengthy and fruitless search, I have to believe the Mity-Lite is mighty rare. Mine is the only one I have ever seen in real life or in pictures. RR5

Previous
Next
Sea Hunt Collector |
Copyright © 2020 All Rights Reserved
As a courtesy and to maintain good relations between all SEA HUNT fans,please ensure that any text or images taken from this website include a credit to SeaHuntCollector.com.
Designed by SunriseGraphicDesign.ca