In my Sea Hunt collection I have quite a few items that don’t easily fit into a category.
They’re not books, they’re not toys or games and they certainly are not scuba equipment.

So we have a bunch of Special Items for me to show you and to describe.

This is an odd item that appeared on the market near the end of the Sea Hunt TV show, in 1961. It’s an LP (Long Play) 33 1/3 record narrated by Lloyd Bridges and intended to educate people interested in skin diving.

Like the book “Mask & Flippers”, this record was also a collaboration with Bill Barada. Bill was a skin diving expert and an instructor. Lloyd Bridges was neither of those things but his famous name from his role as Mike Nelson ensured the record would be a hit.

So, like the book, it’s pretty clear that the text, the technical stuff, came from Bill Barada. In fact, the record cover says “Written by William Barada”. 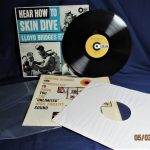 This record was produced by The Carlton Record Corporation of New York and is one of their “Hear How ..” series. They had many different Hear How records – learning a language, driving a boat, improve your golf, even how to train your dog.
These were quite popular from the 1950’s to the end of the 1960’s but by then they were running out of topics and the public was losing interest. The series ended. 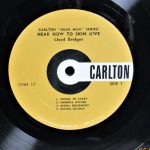 This is a pretty standard LP, black vinyl, with a descriptive center disc on each side. The record came in a protective white sleeve that was paper on one side and plastic on the other. This was then inserted into a stiff cardboard cover that was decorated with some great pictures of Lloyd Bridges. The back side had a fairly lengthy description of the contents plus a list of other “Hear How ..” records available from Carlton.
Then it was slid into a thick plastic sleeve, sealed and was ready to sell. 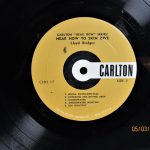 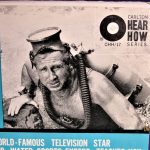 The pictures of Lloyd Bridges are of interest. One is clearly a promo shot of Mike Nelson in his gear as he emerges from the water – and stops for a quick picture!
Another is taken from one of the TV episodes. Hard to be sure but I’d swear it’s from the first aired episode where Mike saves a downed jet pilot from drowning.
The third picture is particularly good. It’s NOT from the TV series but is a picture of Lloyd showing his young dive buddy how to work an underwater camera. The dive buddy is … Jeff Bridges.
We know this is not from the TV series for a couple of reasons including that Mike is not wearing VOIT scuba gear, the official gear of Sea Hunt. 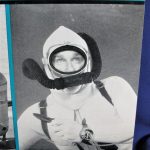 I have 5 parts for this item in my collection.
There’s the record which appears to be un-played. There are ways to tell and I’m pretty sure this record has never been played. I also have the thin paper/plastic sleeve that the record slips into for protection. I also have another all-paper sleeve that was added by Carlton Records. Both sides have advertisements for Carlton products, in color. Then I have the hard cardboard cover that shows the contents and finally there’s the harder plastic sleeve to protect everything while the record is on display in a store.
Everything is in near-perfect condition. 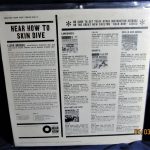 I have not played this record but I have listened to it on a CD version. It is certainly Lloyd Bridges talking and the information is all factual if a bit dated.
I would be lying if I said I was impressed.

These records are not too uncommon. They appear on eBay a couple of times each year and sell for less than $50. Rare they are not. RR 2
In good condition, in an original cardboard sleeve with plastic cover RR 3

The Sea Hunt TV series ended in 1962 but by then it was one of the most recognizable shows of all time. The name ‘Sea Hunt’, the name ‘Mike Nelson’ and of course, Lloyd Bridges, were all household topics of conversation all across America and around the world.

So it’s not surprising that companies would try to use these names to promote their products. Anything related to scuba diving with the name Sea Hunt on it was super saleable. Lloyd Bridges was kept very busy doing commercials for all kinds of products even if they had nothing to do with scuba diving.

Castle Films had been producing 8mm films for home use since 1924 and had a large following who eagerly sought the latest Castle Film. They were the early version of Blockbuster, although you had to buy the films.
It made sense for them to capitalize on the Sea Hunt name and they did so in 1963, just one year after the TV show ended.

The film they produced is an adventure story, “A Thrilling Undersea Adventure Movie” as they say on the box, and it was produced in 3 different formats.
I have all 3 versions in my collection. 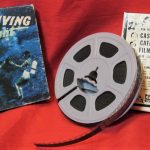 This small film features  highlights from the full or complete edition. We would call this a preview or trailer today. The film is mounted on a 3” gray plastic reel and was sold in a small box about 3 ¼” square.
The top cover of the box was very attractive with images of 2 scuba divers, one girl and one guy, diving on a reef. The sides of the top cover simply show the film name and number. The bottom of box has some advertising for other Castle Films. The film is in black & white.
This 8mm version is fairly common. Getting one in a really nice box is a bit harder. RR3 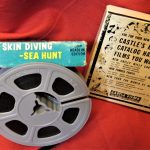 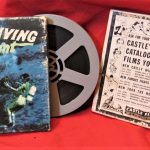 This is the complete film and is mounted on a standard 8mm projection reel about 5” in diameter. The top cover is exactly the same as the much smaller Headline Edition, just larger. There is no extra information on the cover other than as appeared on the small version. It too is in black & white and is also not too hard to find. RR3 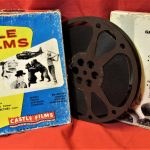 Apparently the Sea Hunt film was popular since Castle Films produced a 16mm version. And it was in color as well, very unusual for that time.
The film is mounted on a 7” reel although the actual film occupies just 6”. While one would think the film is longer than the 8mm full version, it is the same film but in 16mm format using thicker celluloid for strength.
This box is a generic Castle Films box with advertising for other Castle Films printed in color on the top cover plus more films advertised in black & white on the bottom cover. The bottom edge of the top cover has the following stamped in blue ink:
‘COLOR – SKIN DIVING SEA HUNT #9058  – SOUND’.
Apparently both color and sound are special features of this edition.

I have not yet watched this 16mm version of the film. It might be interesting with sound and in color. I’ll try to do so soon and post more information.  I’ve also not seen many of these available. RR4 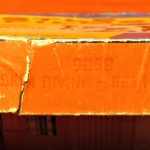 I have not yet watched this film in the 16mm version, but I’ll do so soon and add more details to this description. I have not seen many of these 16mm versions. RR4

Some would say that these are not Sea Hunt memorabilia.
When I hear that, I first think to myself that such a comment is caused by envy so I ignore it.
Then I suggest to the person that these items come from fans of Sea Hunt & are the direct result of the popularity of the show. To recognize those fans AND to honor the show, I include them in my Sea Hunt collection.
You decide for yourself if they fit or not. While deciding, why not enjoy looking at them?

Licence Plates
Over the past 20 years I have accumulated 7 Automotive ‘Sea Hunt’ Licence plates all from different states in North America. Most of these were given to me when their owners discarded them. In one memorable case, a Sea Hunt Licence Plate was presented to me underwater in Silver Springs, Florida (see attached underwater picture. Thanks Mark). In most cases they just arrived by mail, often anonymously.
I think it’s pretty neat that someone paid $200 or so to have a Sea Hunt licence plate on their car. Why not? I did it. You can see mine in the picture.
I am looking forward to the day when I receive one from outside of North America. That would be a real treat.
I’m calling these as a RR5. You can’t buy them and there’s only 1 allowed in each jurisdiction. 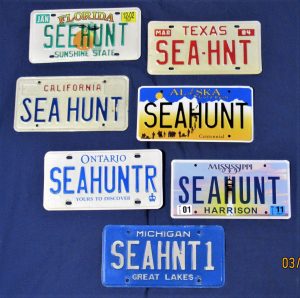 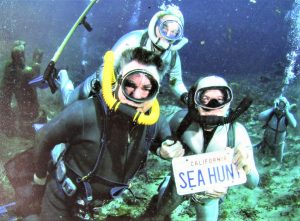 Mike Nelson used several different cameras during the filming of Sea Hunt.
I can name at least 4 cameras that are easily identified with Sea Hunt
1.  the famous Hans Haas Rolleimarin Underwater Housing with a Rolleiflex 2.8 camera
2.  the Aqua Eye which was a flexible housing that would accommodate any small camera
3.  the Healthways MAKO SHARK self-contained underwater camera
4.  an unnamed camera attached to a pole that could be winched down into the water is seen in one episode. It was using a Marine Lantern (look under LIGHTS) for illumination.

I do not own a Rolleimarin Underwater Housing. New ones cost $10,000 or more. Vintage models like Mikes are not far behind.
The attached famous picture shows Mike with his Rolleimarin. Notice this picture was signed by Lloyd Bridges. 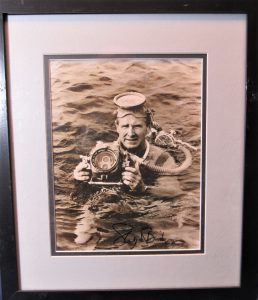 1. Aqua Eye
The Aqua Eye was a pretty neat answer to underwater photography on a budget. It was essentially a plastic bag into which any camera could be placed. Once the bag was sealed shut, a diver could safely go underwater and take pictures. It sounds wonderful but it was far from perfect. The camera had to be a very small one so quality was limited. It wasn’t very easy to operate the camera through the quite heavy plastic of the Aqua Eye. More than a few cameras were ruined by water leaks more the result of poor care than Aqua Eye fault. But they were quite popular for several years. The Aqua Eye was advertised in Skin Diver Magazine almost every month through the early 1960’s. US Divers (Aqua-Lung) had it in their catalog too. I don’t imagine there are very many around in good condition. Unless kept protected, the plastic bag (it was a heavy, clear vinyl material) would deteriorate in the sun and eventually crack & fall apart. RR4 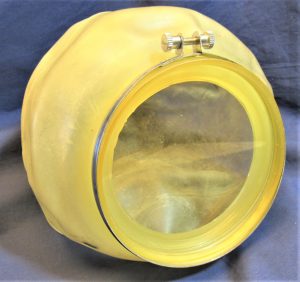 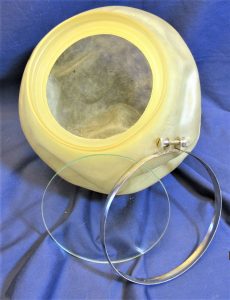 2. Mako Shark
The Mako Shark was marketed by different companies but Healthways was the biggest and best known. The Mako Shark camera was exactly that – a camera. It was NOT a housing with a camera inside. The waterproof housing WAS the camera.
A diver would open the housing, insert the #620 film, close it and jump in. Even opening the camera was neat – it unscrewed. That is, the diver simply turned the back and it unscrewed from the front – couldn’t be easier.
It was relatively cheap and quite rugged and got divers into underwater photography quickly, easily and cheaply. It’s interesting that the very famous Nikonos camera used the very same principle. Although much better built and accordingly, much more expensive, the Nikonos is also a waterproof camera – open the camera, inset the film, close it and jump in.
So the Mako Shark was around and popular for quite a while, not just on Sea Hunt. RR3 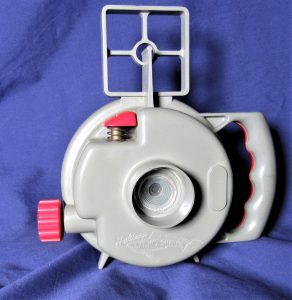 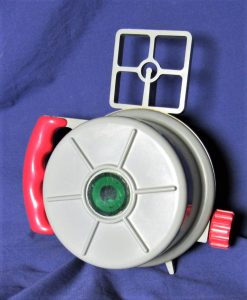 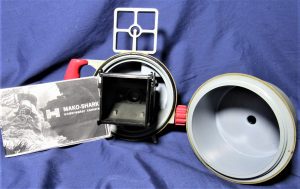 Sea Hunt Collector |
Copyright © 2020 All Rights Reserved
As a courtesy and to maintain good relations between all SEA HUNT fans,please ensure that any text or images taken from this website include a credit to SeaHuntCollector.com.
Designed by SunriseGraphicDesign.ca