This is Sea Hunt #1, the first one published by Dell in August 1958.
I have three of this issue, sort of. Let me explain.
First, I have an very nice copy of #1 that has an advertisement on the back cover for Juicy Fruit gum. Apparent 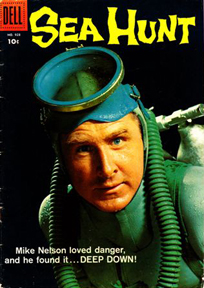 ly chewing Juicy Fruit gum helps keep your teeth clean too. Didn’t know that! I think the advertising guidelines in 1958 were less stringent than today.
Second, I have an equally good copy of Sea Hunt #1 that is absolutely identical in every way – except for the back cover which, instead of an ad for Juicy Fruit gum, has a cartoon story called ‘The Temple of the Depths’. It comprises five windows of art with accompanying text that tells the story of a Roman Galley that sank in the Mediterranean and the efforts to recover the wreck and contents by the Greeks first and later by the French.
And last, I have one more Sea Hunt #1 that is of particular interest. This one is not a complete copy. It’s the cover only. This one you won’t find anywhere because mine is the only one. Let me explain how I know. When these comics were being prepared for print, a cover was produced for the artists and graphics people at Dell to work on. You might call it a working copy. In fact, they called it the Shop Dummy. Once the final version of the Shop Dummy was approved and sent to the printer, this Shop Dummy was trashed. Someone saved the Shop Dummy for Sea Hunt #1 and I have it in my collection. It’s obviously very special.


Technically, Sea Hunt #1 is properly called Dell #928. Dell assigned their comics a number based on publication order – NOT name. So this was Dell #928. Dell #929 could have been Wagon Train or Wyatt Earp or any other Dell comic. The second Sea Hunt comic which we call Sea Hunt #2 is actually Dell #994. The first three comics were numbered this way and then they were numbered sequentially thereafter. That is, Sea Hunt #3 is Dell #1041 but Sea Hunt #4 is Sea Hunt #4 and so on. These numbers by the way, are found on the front cover directly under ‘DELL’ for the first three comics and then on the bottom of the first printed page (not cover page) along with the other publication information.
There is a good reason for this odd numbering system but it’s related to the Dells’ artists and has nothing to do with Sea Hunt. I leave it to you to discover that reason if you’re interested.

So this is Sea Hunt #1 published in August, 1958. The year of publication is on the bottom of the inside front cover but not the month. I had to search that information in comic book collector files. Sea Hunt #1 is a tough one to find in really good shape. It’s black so is easily damaged by bending and age.

Having a different back cover on the same issue is called a variant in the comic world. Depending on the market to which the comic was intended, the publisher might put different advertisements or other copy on the back cover of the same issue. Sea Hunt #1 comes with either the ad for Juicy Fruit gum or the picture story called ‘The Temple of the Depths’.  Both comic interiors are the same but, if you’re serious about collecting Sea Hunt memorabilia, you have to have both versions. Both versions are relatively easy to find. It’s a simply matter of buying lots of comics until you have them both or at least asking the seller to tell you what is on the back cover.
The shop dummy was a complete cover, outside front, inside front, inside back and outside back. The outsides were in color of course, while the insides were black and white. Once the photograph of Mike Nelson had been chosen for the front cover, the shop dummy went to the advertising department to have the outside back added. Then the graphics people added the pictures and text to the inside front and inside back. This shop dummy then went to an editor who inspected it to be sure it was perfect before it went to the printing department. This editor would make comments right on the shop dummy for things that needed correction. He might say “needs more red in the face” or “remove these black marks” or “make the wetsuit bluer”. These are actual comments from the Sea Hunt #1 Shop Dummy. Once the editor was satisfied, the shop dummy was sent to the printer to be copied and then the covers for Sea Hunt #1 were printed. Once the covers were printed, the shop dummy was trashed. It was of no use anymore. Except someone kept the shop dummy for Sea Hunt #1 and I have it.
When  there is only one of something in existence, that’s called rare. When there is only one of something that ever existed and it was supposed to have been thrown out, that’s exceptionally rare.

In time, I will add pictures of the back covers, the contents and the shop dummy for Sea Hunt #1

Sea Hunt Collector |
Copyright © 2020 All Rights Reserved
As a courtesy and to maintain good relations between all SEA HUNT fans,please ensure that any text or images taken from this website include a credit to SeaHuntCollector.com.
Designed by SunriseGraphicDesign.ca